Games 2 vs Norse Marauders. Fighting the Street Brawl scenario this time to represent the Norse arriving in Sartosa. This time it is the Sartosan highlands, as that is what terrain I have at my place!

The captions set out the narrative…click for more! 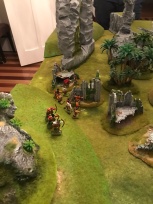 The Estalians set up with a refused flank and archers holding the high ground.

The Norse come down from the hills…..

The Estalians advance into the valley…

A werwolf has enough speed to stalk across the board to attack the archers, but one brave swordsman has hung back to help them. 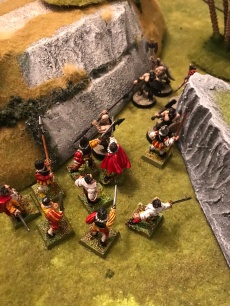 The two sides meet in the narrow pass. 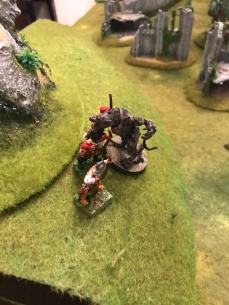 The werewolf attacks the archers and the swordsman jumps in to assist.

The brawl in the pass heats up. Perez, Alvaro and Miguel all take an enemy out of action. 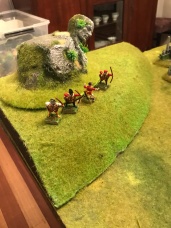 The archers slay the werewolf! They immediately start shooting again, taking out one of the Norse scrambling over the hill to assist their friends.

The battle takes a heavy toll. Both Estalian champions are taken out of action, as is one swordsman.

The other swordsman runs through an enemy , and battle gets desperate as the Norse reinforcements get closer!

The Estalian captain goes down, as does Ana.

Miguel kills another enemy hero (both killed while knocked down, must be his style!) 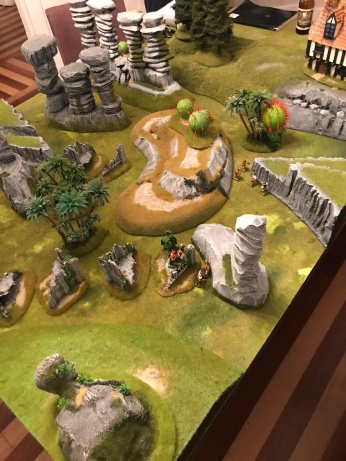 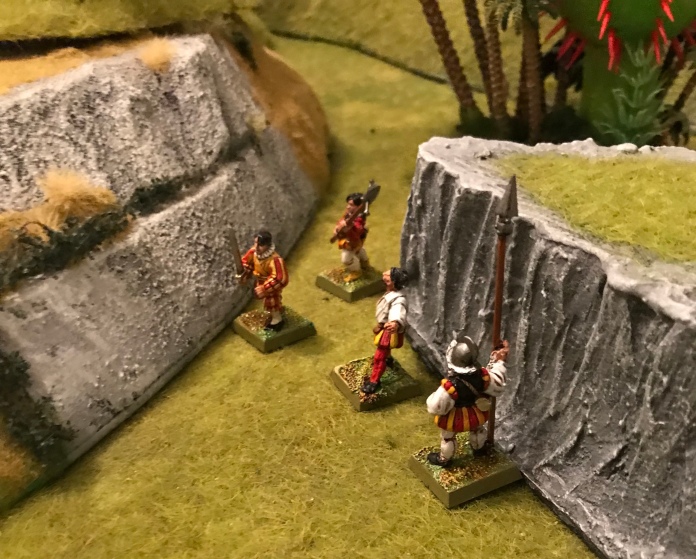 …the shaken Estalian survivors hold the field, but the toll has been high.

The end result was a victory for the Estalians. The Norse commander thought about conceding (voluntarily routing) when the brawl in the valley went so badly for him, but having taken my captain out of action he thought I would voluntarily rout the next turn. I rolled the dice and the warband passed its leadership check, and I felt I couldn’t let them down; if they were prepared to stick it out, so would I! The Norse routed the next turn and the Estalians claimed the field, but when it came time to count the casualties I was overheard to remark, “One more such victory will undo me!”

@warhammerofficial I remember...
I guess you’re all listening to the @imperialrebelork podcast by now (if not, why not?). Well, in a step towards becoming an international hobby celebrity, I have been interviewed for episode 11. Check it out! #internationalwargamingcelebrity #imperialrebelorkpodcast
%d bloggers like this: