Dear Readers, as things have been quiet lately, I have photographed some older models for posterity and for your viewing pleasure. When I first got into the hobby in the mid-1990s I was barely 7 years old, and I acquired an assortment of 5th ed. Warhammer lizardmen, and the 2nd ed. 40K box set…some of which was poorly painted, broken, and variously abused. 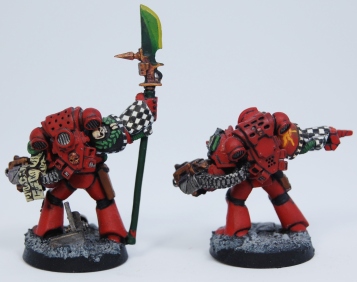 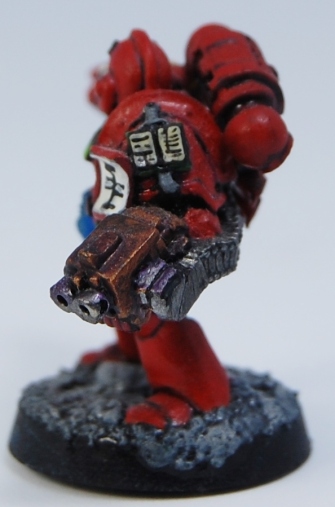 The collection was added to over the years, mainly the Space Marines and Space Orks, in dribs and drabs, but I have to admit I lost some interest as 3rd ed. 40K was released and I came to hate multi-part plastic figures, and not for the last time. I still picked up the 3rd ed box set (one gaming acquisition that I no longer have, apart from a few dark eldar, and cannot for the life of me think what happened to it) but I slowly became less active and hobbying petered out completely when I went to university.

I missed it though and eventually got back into it, and I have no memory of how this came about, with some British and Prussians for some Victorian Science Fiction gaming with Perry Miniatures‘ Sudan range and Wargames Foundry Boer War British for the Brits, and Foundry Prussians for their foes. I still have some which I managed to paint (and many I didn’t) but the lure of 40K was too strong and when the Grey Knights were updated in around 2004 I could no longer resist the call of the Emperor. I’m not sure when I actually walked back into a GW store but it must have been a year or 2 after that release.

I painted them red, inspired by John Blanche’s versions in the Daemonhunters Codex but mostly by Victoria Lamb‘s (whose claim to fame is basically inventing the OSL technique) stunning versions from the Australian Golden Demon 2006 (unfortunately there no longer seem to be any photos online…I will see if I can find any). 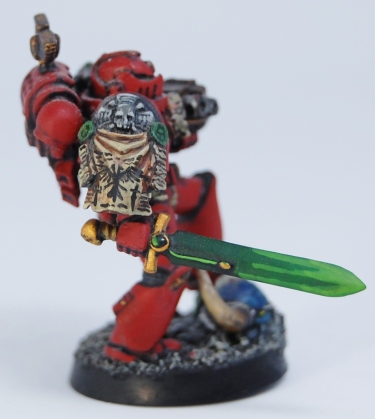 I never played a game with them until much later, and of course I still have many to paint.

In 2nd ed. I run them 2 squads of Grey Knight terminators using the rules from Dark Millennium. The power armoured chaps are run as Space Wolf Grey Hunters with bolters, bolt pistols, and power swords. The leader is a Space Wolf Rune Priest standing in for a Grey Knight Grand Master, and in 2000 point games they are usually backed up by two dreadnoughts with 2 assault cannons each–nasty but given the army is so small and reliant on psychic powers I need any edge I can get.

I thought about repainting these guys but in all honestly they don’t look bad enough, though my current standard is a lot better. I may add some highlights later and I have plans to re-do the bases in green. It is more important though to finish more of them than re-paint these ones (basically I need to finish 9 more terminators and the leader and dreadnoughts to finish off my 2nd ed. army). I tried to give them all their own heraldry which I thought came out fairly well, overall. 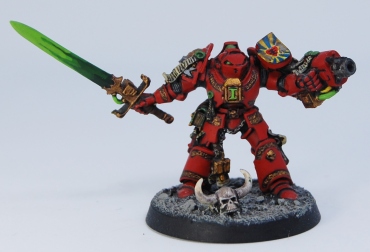 The conversions were extremely difficult and all done before I ever owned a dremel, which would have made it a lot easier. Let me know if you have any questions!

I hope you like them. Overall, I’m still fairly pleased but that may just be subjective!