Around a year or so ago, I finally acquired one of my all time favourite miniatures, the Rogue Trader Adventurers Citadel Official on eBay – paying rather too much – and naturally he was immediately neglected and not painted until quite some time later.

I decided to paint him as an Inquisitor, as I wanted to use him in my games rather more than would be possible for a civilian figure (we play 2nd edition 40K battles rather than more role playing or narrative skirmish games). I also wanted to explore the more human side of the Inquisition, which they presumably mostly are (as opposed to the power armoured super human Inquisitors who really must be comparatively rare).

Being that my main army is Grey Knights he fit in quite well (in lore terms anyway) being represented rules wise as an Imperial Guard Colonel with a command squad comprising four melta-gunners mounted in a Rhino or Chimera. In actuality, the humans were a massive weak link in the chain and were promptly dropped. I am not a power gamer, but with a 2000 point army having only 23 models in it, one has to be rather ruthless.

Some time later, therefore, he was finally painted – and I am rather pleased with how he has come out. I am currently working on finishing off his bodyguards. 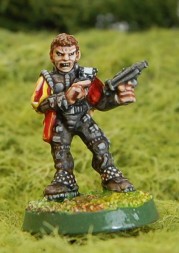 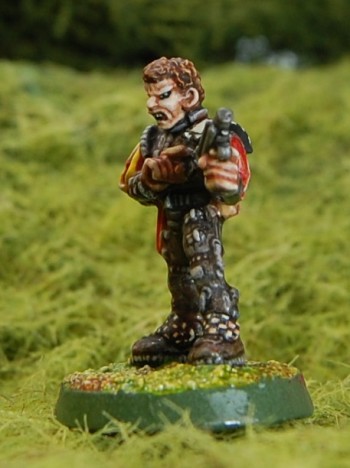 His space-suit/armour was painted by painting watered down black ink straight over a grey and white zenithal primer coat. It was drybrushed with white. The rest of the areas were base coated then the whole model was coated in a mix of GW Flesh Wash and GW ‘Ard Coat. It was then highlighted with GW Fortress Grey and White.

I liked him so much I even wrote some background for him (unusual for me) and I may continue the story when I post up pictures of his bodyguard squad and vehicle.

Hrodebert Garran is a bureaucrat par excellence, now a member of the Holy Orders of the Emperor’s Inquisition. His affiliation is with the Ordo Scriptorum. Lately, as his biography will show, he has become involved with the Ordo Malleus in an uncharacteristic attempt to subvert the bureaucracy he has served for so long…
Garran was born on Holy Terra. His father was a bureaucrat in the Adeptus Administratum, having risen to the rank of Master of Internal Governance and Internal Audit of one of the Administratum’s myriad divisions. His mother was a formidable lawyer, a regular face in the Probate and Chancery Division of the Terran Supreme Court of Justice.
Seeking a better life for their children, Hrodebert’s parents moved to the Ultramar System. Hrodebert read classics and ancient history at the Military Academy of Macragge, and undertook military service in the Macragge Planetary Defence Force where he was commissioned as a Lieutenant.
Hrodebert was competent as a soldier but where he truly excelled was in bureaucracy, and he was duly assigned to the supply and logistics division. He was soon posted to a division of the Imperial Guard and served in several campaigns, once even coming within 3 miles of the front line!
Returning to Macragge, Hrodebert studied for a Masters of Public Administration at the University of Macragge and it was here that agents of the Inquisition approached him.
Hrodebert found destiny returning him once again to Holy Terra where he took his Oath and entered the Emperor’s service as an agent of the Ordo Scriptorum and became affiliated with the Amalathian faction of the Inquisition; the consummate bureaucrat, he was convinced that overall the Emperor’s plan was unfolding as it should and radical change was to be avoided, prevented where necessary. He was adept at crafting policies and procedures and implementing them, in a collaborative and consultative fashion (of course), upon the adepts of the Administratum, to ensure that free-thinking and initiative could never infect their ranks.
It was whilst delving into some procedural and systems failures of the Adeptus Librarium that the next and most dangerous phase of Hrodebert’s life would begin, a phase that would end in a dangerous game of cat and mouse having its terrible denouement on the frontier hive and forge world of Korsk II and one of the largest tank battles in the history of the Imperium.
To be continued….
++++++++++++++++++++++++++++++++++++++++++++++++++++++++++++++++++++++++++++

(*From Robert Garran, Australia’s first civil servant and first permanent head of the Attorney General’s Department, and a justly admired man. Hrodebert’s petty and wasteful bureaucratic meddling should not be taken as a comment against Garran himself [the name was chosen to tie this small story into a real slice of history and because it sounded sort of grimdark in itself] but as a satire against bureaucracy in general.)