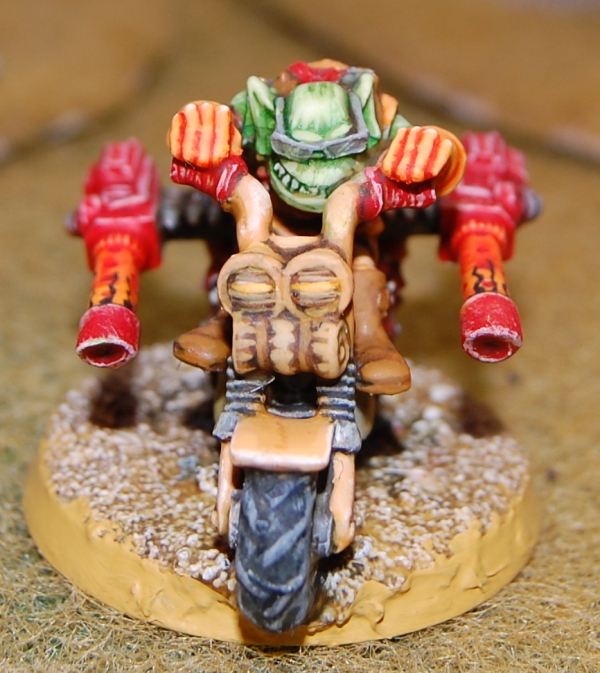 Essentially, the painting of these was the same as the Bad Moons, except that instead of the blue there is grey! It is just GW Codex Grey shaded with Nuln Oil and then highlighted by adding white to the Codex Grey.

The tank is a Tamiya 1/48 Marder III, obviously heavily converted. The stowage and ammo boxes are from a Tamiya 1/35 M113 along with a 40K jerrycan. It was base-coated with Tamiya Dark Yellow TS-3 (enamel) from a spray-can and highlighted by successively adding white to GW Desert Yellow and dry-brushing. The tank gunner was painted the same as the infantry. The guns are 3rd edition plastic shootas with lengthened barrels (ie, big-shootas in 3rd ed. lingo) and the mounting was built with sprue.

In game, it is intended to use the tank as a war-buggy. The twin linked big-shootas will stand in, in 2nd edition terms, as either heavy bolters or autocannons depending on the mission and the points available.

Eventually I may add a flag, a tank commander, and possibly cover up the hole in the front armour (where the machine gun would go) with an armour plate.

The inspiration for the tank was originally this photo from White Dwarf 223 (AU), though I have subsequently seen many other Rogue Trader Ork and 40K Ork armour conversions made from scale models of German WWII tanks.